“As a young man, I grew up always wanting to be somebody else, ‘cuz I didn’t know who I was.”

Following in the footsteps of New York Rap Legend Ol’ Dirty Bastard (ODB) of the Wu-Tang Clan, We’re Gonna Be Lords briefly chronicles the lives of 4 NYC rap acts in their quest to make it. All hailing from different parts of the city, The Underachievers, Le1f, Flatbush Zombies, and Action Bronson all share the same hustle, as director Robert Loupuski (who directed the 2012 Watch The Throne documentary) paints a dark picture of the minds of these creatives. The short documentary explores the roots of each artist, and how they got in the game, intertwined with some vivid imagery of the city, and some would-be children attempting follow in their footsteps, and even praying to ODB at one point. 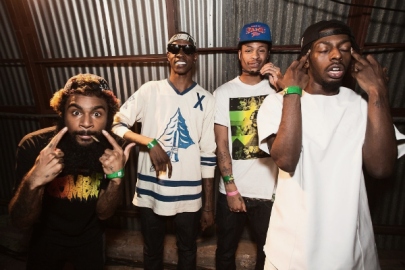 (Above: Members of the Flatbush Zombies and the Underachievers)

Overall, the 10 minute film leaves you wanting more, but if you wish to really study the mind of each artist i would suggest you check out each of their musical catalogs, or at least of the artist you we’re the most intrigued by. Study the art, and I promise that you will be inspired in some way, shape, or form.

Check the documentary below, and indulge into the rare look at the life of one of these artists, and hopefully you too will be inspired by some of the words, or simply entertained if that is all you wish to pull out!

We’re Gonna Be Lords from Forgotten Sundays on Vimeo.