Last week popular hip-hop magazine, XXL, dropped its much anticipated freshman cover, to some mixed reviews. The term “freshman” is reserved for the best and brightest young people in any industry, making a name for themselves with high hopes in the future. Without sounding too full of ourselves, just about 6 months in, we know that the team we have here at RLGT are the definition of this term, already making leaps and bounds. But with that said, today is about the music.

Halfway into 2015, todays top 5 list (a series you will see popping up here and there) will focus on the top 5 freshman thus far in 2015. These are the artists you’ve seen everywhere, that you may or may not have heard of before this year, who we expect to finish the year strong. Without further a do, lets get into it. This was our first full team collab, so expect to get a little bit of everything!

Another act you may not have heard of before the year began, who is fittingly 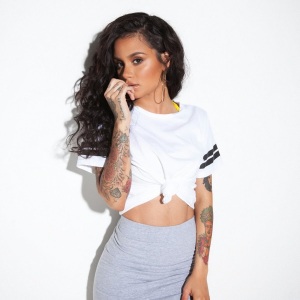 “making waves”, is the self dubbed Lani Tsunami AKA Kehlani Parrish. At first glance you might guess another female rapper? Hear she’s from the Bay, and hope and pray that we aren’t dealing with another Lil’ Debbie on our hands? Well fortunately although she is repping the bay (Shoutout to #DUBNATION, RIP Mac Dre), Kehlani is actually a talented R&B singing 20 year old, who just dropped her latest project You Should Be Here, which is being praised as one of the top ALBUMS of the year so far.

Lani quite frankly is a power singer, with an amazing voice that would make you fall in love no matter what she looked like, but luckily for us she is quite easy on the eyes (dubbed Baelani by many), and her west coast charm is evident. With many big collabs under her belt already, and her sample making its way onto Drake’s last album, expect Kehlani to finish the year strong.

Check out YSBH here, to get familiar with Kehlani.

Vicktor Mensah, better known as Vic Mensa is my vote for Rookie of the Year so far, if you dare call him a rookie. The former Kids These Days front-man, and general of the SAVEMONEY army (Chicago collective, home to Chance The Rapper, Towkio, Joey Purp, etc), has been making great music for years, but after really bursting onto the scene in 2014 with the INNANET tape, Vic has had a huge 2015.

Working with Kanye West on “Wolves” for SWISH (italics), and then again on “U MAD” for his own debut, and then signing to the Roc, Mensa has had his fingerprints on everything this year. Reminiscent of past freshman Logic, his debut will be much anticipated, and will be the true test of his staying power. Until then, expect Vic to continue with the collabs and features, and have even more of a showing on Kanye’s release, whenever that may be.

A couple of tracks to listen to to get familiar with Vic from 2015 would be “Involved” off Towkio’s project, and “HAVE U EVA” with the Leather Chords.

Artists pride themselves on the impact that they can create for their respective audiences, and if you haven’t allowed yourself to be influenced by Johnny Rain and his art, I highly advise the notion.

Johnny Rain severed us with his debut album 11 earlier this year, and preluded the debut with a successful string of mixtapes that together showcased the immense levels talent Rain posses in terms of vocal delivery, song-writing and production.

Just like artists pride themselves on the impact they create for their audiences, I will always in turn pride myself on the artists that have impacted myself, and the people around me.

That’s why I highly recommend you have Johnny Rain in your itunes library. If you’re looking for an album that you can play through in through, no matter what season of the year it is, or what particular situation you’re in, or what your personal musical genre preferences are, then you should stream “11” down below.

Start with the album, and work your way backwards with his mixtapes, It’s a great musical experience as you get to see a mans musical transformation that’s spread out over years, in a few musical collections that’ll surely impact you the same way they did me.

His full name is Raury Alexander Tullis. He may or may not be an industry plant… furthermore he may or may not be part of the illuminati. Either way, I don’t give a shit what he’s a part of. In just the past year, we’ve all seen the success of this 19 year old grow exponentially like none other.

The premiere of Raury came in the form of a beautiful mixtape called Indigo Child, released in last August. Watching and listening to the videos for “Cigarette Song” and “God’s Whisper” were life-changing, I’m telling y’all. I rarely come across artists that actually hit me on a deeper level (Kanye and Johnny Rain), but Raury has definitely been one of those people who allow me to see the world in a different light. Those two songs are like anthems to me; they speak in many volumes that no other artist can.

With such an immense impact he’s had on me already, and highly assuming he’s doing the same for many of the young ones like me out there, I believe he’s here with a purpose and will help other find their purpose through his evolution in the music biz.

This 18 year old rhyme conductor hailing out of Nanuet, New York is the rawest thing since maggoty meat. This kid can produce, and at the same time, rap like someone who’s been practicing in the mirror for 20 years. No wonder he draws so many comparisons to his idol, MF DOOM (they made an album together as well, Nehruvian Doom).

I first heard about this cat back when I was watching a DeadEndHipHop video on YouTube. They were doing a review on his album Nehruvia, and I thought it was worthwhile to check it out (this kid was 16 at the time). Songs like “Her Ballad”, and “Fickle Mind$” displayed just how advanced this kid was at his craft (more advanced than a lvl 10000 dragon slayer). He’s had many projects since this first one, all of them being quality pieces. His latest work “Nehruvia: the Nehruvian EP, is actually one of my favourite pieces of the year.

Rap music has changed over the many years it was introduced to popular culture. While change is a good thing, it’s always good to be reminded how things were when it all started. Bishop Nehru is able to bring this feeling back to his listeners, but not at the risk of sounding exactly like those who have done it before him. His beat selection, and unique rhyme schemes keep his work sounding progressive, while he draws on more conservative feels.

#rare View all posts by hussonz