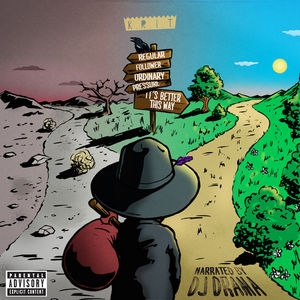 Hey kids. We at the best site north of the Bow have made the executive decision to shift the focus of our 100 Word Reviews to put on some albums that may have flown under your radar. Because isn’t that the point of all this? Apart, of course, from getting a co-sign from Kanye, helping him design shoes and ultimately becoming his creative muse (but that goes without saying…).

With last year’s Cadillactica, Big K.R.I.T. made what the south has been trying to craft since a drought started in 2006: an Outkast album. 3 Stacks and Daddy Fat Saxx’ finger pads didn’t touch the record, but it reeked of their stank. Last week, the King Of The South dropped It’s Better This Way, a 14 cut tape narrated by DJ Drama. The loose concept, and it very loose, centers on the path K.R.I.T.’s taken over the last few years, reworking his sound, honing in on the country sound that made his original run of mixtapes up to the disappointing Live From The Underground so spectacular. While it may not be as pristinely executed as his last full-length, This Way serves a great reminder who the one of the most vital (and articulate) voices coming from the country.

Standout Track: Though it can come off a bit preachy or self-righteous at times, the self-titled closer leaves the best impression of what’s to come from the King, by doing exactly what he does best; throbbing bass, exuding warmth that lets his silky voice groove.