Part 2 of our Year-End Review is officially here! As an extra special X-Mas day present, today we’ll be counting down our top 10 albums of 2015. These projects each featured great production value, fitting lyrics, and the staying power to prove their worth. To quote us earlier, 2015 has turly been the “year of the rap gods“. Catch new lists every other day this week, leading up to our top 10 songs of 2015 & our year end #NYE2016 playlist on the 31st! Happy Holidays from redleafgoldteeth!

ASAP Rocky is hallowed with an aptitude that is scarce amongst his peers. He isn’t bleeding with a discernable sense of overcompensation like everyone else. He isn’t catering to constantly validating his place within the industry. He radiates natural confidence, and his musical yield seamlessly exemplifies it.

At.Long.Last.A$AP comes after a two-plus year break from his debut album. There was a lot that happened in the gap between the albums (RIP Yams) and these goings-on made A.L.L.A a more open and endearing effort. “Holly Ghost” is the album opener and it features gripping tale of faith and uncertainty. “L$D” is one of the most polarizing releases in the last decade of hip-hop with its sing-song psychedelic nature. Joe Fox, a formerly unfamiliar song-writer, was hand-picked by Rocky and notably highlighted through the entire album.

A.L.L.A is different. It’s confident. It’s stands for itself, as does Rocky in his 2015 efforts.

Young Thug had the best run of releases this year (Future’s official solo output was 51 songs, Thugger’s was 53 plus the leaks that brought the total up to roughly 42 billion so he gets the edge). Barter 6 stands as one of the years best albums period, Young Thug stripped down to thirteen subdued landscapes to terraform as forests of green and gurgling rivers of lean. Slime Season 1 and 2 are a joint package, an odyssey stretching over to and half hours where glimpses into his dangerously unhinged mind depict casual understanding of sexual politics in friendship (“Best Friend”), joy at being appreciated (“She Notice”), loneliness (“Never Made Love”), fatherhood (“Phoenix”), dependency (“Take Kare”), twerking it (“Twerk It”), love (“Raw (Might Just)”), and oral sex (the rest and most of the aforementioned). Together they have created a textbook in flawlessly-patternless absurdity. Last year’s 1017 Thug series and Rich Gang: Tha Tour mixtape penned the method in which Thug operates, but in 2015 he rewrote the manual. Leaving out most of the syllables, of course.

Likened to the legend we know as Sam Cooke, Leon Bridges takes us back 65 years and does so flawlessly. Every song on this album is a “feel good” track. Even though he does risk sounding like an imitator at times, this album was truly needed to remind us where music has come. It may come as a surprise to hear that Leon Bridges was actually a rapper at some point in his career, because what he’s making right now is the furthest thing from his previous endeavors. Trust, “Brown Skin Girl” gives me the goosebumps every time. Coming Home proves to be one of the strongest, and most under-rated albums of the year.

7. Late Nights: The Album by Jeremih

Jeremih was never a man that really struck as a man that could create “real” art. It always felt as though he would be exiled as one of those radio rappers, the R&B version of Pitbull. However, with his latest release, the long overdue Late Nights: The Album, he has definitely proved us wrong. The album is a trip through some kind of everlasting dream party-land, every song sounds as though it could be played at the club – Guess that’s why he called it “Late Nights”. Proven by standout tracks such “Pass Dat” and “Impatient” which features help from Ty Dolla $ (who also released a strong project of his own this year), Jeremih’s shining moment has finally arrived.

6. If You’re Reading This It’s Too Late by Drake █♣█

No best albums list would be complete if Drake wasn’t on it. It’s just one fact you’re going to have to admit. If he releases it, we will listen to it, and most likely, we’ll all enjoy it. And honestly, what didn’t Drake accomplish this year? First of all he released If You’re Reading This It’s Too Late, which was deserving of more than a couple fire emojis. Then he collaborated with Future on a project that can be mindlessly considered as a collection of bangers on What A Time To Be Alive. Finally, he completely obliterated Meek Mill’s career with the 2nd retaliation track, “Back To Back” and showing those inappropriately deadly memes during his set at his OVO Fest, this past summer. IYRTITL almost seems like an effortless project, further demonstrated the title that Drake chose – but the tracks say otherwise. Coming through with “Know Yourself” that could easily be Toronto’s municipal anthem (if that was possible), while “Jungle” gave us some of those good old Take Care vibes, and “Preach” was simply a PARTYNEXTDOOR aided caddy-slapper. As far as surprise releases go, they don’t get much better than this (sorry, Bey).

The dream-pop duo of Victoria Legrand and Alex Scally soundlessly had a perfect year in 2015. With two critically acclaimed albums (Depression Cherry and Thank You Lucky Stars) released within a few short months of one another; Beach House blessed us with yet another impeccably progressive presentation of musical artistry.

Depression Cherry stayed true to the bands musical roots. Simplicity in instrumental usage and strong melodies that distinctly carry themselves through the tracks were naturally featured throughout the album. “Sparks” (the albums lead single) is unfamiliarly yet beautifully noisy with its knocking drums and its ripping guitars. “Days of Candy” features eight singers that create a 24-part choir. The opening track “Levitation” bestows the applicable introductory lyrics of “There’s a place I want to take you.”

Depression Cherry takes you on a pleasantly depressing journey to a world where you find a sense of exhilaration in your sorrows, a world where a simplistic musical composition manifests itself into an obfuscating journey through the realms of melodies and instruments.

There’s beauty in sadness, and Beach House once again in 2015, shows us why. 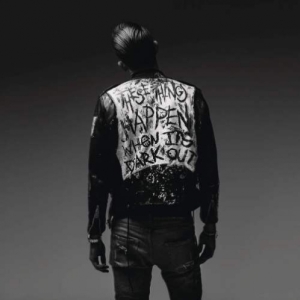 Loved by college-aged white girls, but hated by most others, G-Eazy had a lot to prove with When It’s Dark Out, his followup to the 2013 release of These Things Happen, which saw him sticking close to the “typical” G script. The new project was not only a chance to prove himself as a more versatile artist, but to really show that he’s got what it takes to be amongst the heavy-hitters in the game. Though it could be argued that G-Eazy tried to be a little too versatile, he did show that he could hold his own on tracks with some of the biggest in the game from Big Sean, to Chris Brown, to Kehlani, and not get overshadowed. Perhaps the best chunk of the album (an album with really no bad songs), was the mid-second half where sad-boi Gerald made an appearance. Completing the four-peat, “Sad Boy”, “Some Kind Of Drug” (the GEM of the whole thing), “Think About It”, and “Everything Will Be OK” anchor WIDO with a believably beautiful & soulful essence. Speaking to the end of his relationship with singer and longtime girlfriend Devon Baldwin, and then the tragic passing of his mother’s lover (in his arms), the album takes a whole new turn. Finally, rounding out with a track that’s strictly-for-the-Bay, G-Eazy easily impresses on his Sophmore effort, no matter how overlooked he may continue to be.

Stream When It’s Dark Out, here

The latest Mac Miller memoir proceeded without much excess hype, solidifying Mac’s position as the world’s most famous B-List rapper (or perhaps the world’s least famous A-List rapper?), a position led by his own futile actions and lack of consistency. Finally though, The mixtape-era hero turned in-betweener (when you become too old to rap about weed, but too confused to make the transition to a new style), finally finds his stride, fully on GO:OD AM. From the more than fitting intro, “Doors”, to the standouts like “100 Grandkids” with its “Bad Boys For Life” reference, and “Weekend” which is held down by the soulful voice of Miguel, all the way to meaningful closers like “Ascension”, the project is one of the most cohesive bodies of work that we saw all year. Overall, GO:OD AM is the perfect easy listening album, with the perfect amount of depth for heavy listeners, and enough GOOD SONGS (I swear, people forget that a good project isn’t good, if there aren’t any good songs…) to keep the project from falling flat whatsoever. Consider this the return of the Mac.

2. I Love You, Honeybear by Father John Misty

Stock markets crash, girls bitch and moan, guys are assholes and as much as we fight it, we’re all still going to fall in love. This is the world we inhabit, the one Father John Misty encapsulates. His I Love You, Honeybear circles the concept of the tumultuous relationship with his wife Emma, including its unmentionables; condescension, frustration, devout infatuation. As icy as his demeanor appears at surface level, the warmth he resonates is enough to melt your heart; he’s head over heels and hates every minute of it. From the opening strums of its lush, orchestral title track, sardonic asides and tough talk to amorous competitors on “Nothing Good Ever Happens At The Goddamn Thirty Crow”, the capitalist nihilism and humorless laugh track of “Bored In The USA” or tender reflection of a love story to be on “I Went To The Story One Day”, FJM’s romanticism is the closest modern songwriting has to a realistic one; disenfranchised jerks pissed off they’ve found their match, hipsters acclimating to a mainstream emotion, ordinary folks in the throws of extraordinary circumstances  On I Love You, Honebear, his wit is matched solely by his devotion, only one of which he’s got a firm grip on. He’s still lying in her bed though, sorting out forever.

Tetsuo & Youth may well be 2015’s most underappreciated, underrated, & undervalued album. A year that has been overwhelmingly dominated with club anthems, Vine hits, and the so-called “saviours of rap” have seemingly succeeded in pushing Lupe away from the spotlight.

Our culture is changing at a rapid rate; With the “Dabs” and the “Twerkin’ it’s”, it can be hard to focus on some conscious rapping now and then. Tetsuo & Youth is the epitome of what doesn’t fit into Hip-Hop today – It’s not “classic” enough to be Kendrick, and its not zany enough to be the Migos. Lost in the crowd, Tetsuo & Youth brings forth quality rather and quantity. Lupe Fiasco is a pure lyricist and his is craft is unlike any other. Transitioning through 4 distinct themes – each intermission represents the sounds of a season – Lupe is able to tie it all together brilliantly. As a concept album, T&Y brings this sense of artistry that can only truly be appreciated by real Lupe fans. Backed by a portrait painted by Fiasco himself as the album cover, and summarized by the monument of a song that is “Mural”, Tetsuo & Youth is Lupe Fiasco’s best work to date. The scary part about all of this is that apparently he’s working on The Cool 2,  which he claims is going to be better than this project was. We can only hope.