In our new segment Local Spotlight: An Interview with… I will be talking to bands from across Alberta to bring you the Canadian talent that you need in your life. This week I sat down with Edmonton band Nature Of to discuss new music, live shows, and Skate Church.

I walked into Friends and Neighbours [on Whyte Avenue] and sat down at a booth. The only two people in the small cafe were myself, and a guy in all leather with too many neck tattoos. I immediately liked the place.

Soon after, Steve Schneider, Cole Switzer, and Kyla Rankine sat down and ordered some coffee. Their other two band mates, Allyson MacIvor and Sydney Leard, unfortunately couldn’t make the interview because of work. “I am trying to make it work as a full time musician” Steve jokes, as he has just finished up his carpentry program at school. “We come here all the time actually…the music is never too loud…usually just families around and not people chugging beers and watching sports.” Right from the get-go, it was blatantly apparent how laid back the band was, and their humble attitude stopped them from making any comment even slightly negative.

Nature Of, originally from Sherwood Park, Alberta, was born out of Skate Church, an indoor skate park in Sherwood Park, with Steve, Cole and Kyla meeting there when they were younger. “I actually have a very vivid first memory of meeting Steve” Cole mentions, right before the waitress stops by to take three orders of Pho (or Phaaa; that was also discussed at length) “I remember, you always have the same shoes that you use [when skateboarding], and Steve had the same shoe that I loved and had for so long, and, um, I just remember saying ‘hey man nice shoes!’” And from that short but sweet moment on, Nature Of was born. “Allyson joined after, we needed a drummer and she played with us for a show, and ya, it kind of worked so she kept playing with us. We had some strings on the record, and [Sydney] came and performed with us for one of our bigger shows, might have been a CD release or something…and from that point on she really jived with us too.” Steve adds to round off the rest of the band.

Now, if you have ever listened to Nature Of – or on the off chance you haven’t, I highly suggest you do – their music has a more folk, indie rock feel; not something that one might associate at first when you think of a band from the skateboarding world.

“I think we’re a little bit more relaxed than some people, not that punk kids aren’t relaxed *cue humble-ness*, I don’t know, just, I guess a difference in musical opinion.” Steve notes, discussing how their sound fits in more than one might think. “A lot of what you listen to becomes your influences…although I do admit I did listen to a ton of punk when I was younger” Kyla adds as the band talks about who had more of a punk phase back in the day. “I came across punk rock through the indie community, there is a lot of crossover; I know in a lot of Canadian cities there are.”

When it comes to the music, the songs on their self-titled debut album are some of the most relatable songs I have heard; if they aren’t tugging at your heart-strings then there’s a good chance you don’t have any. Each track sounds like a story taken from a moment in time, brutally honest yet hidden in a shroud of mystery, which Steve touches upon. “Most of the songwriting there has kind of a fiction blur, but I think stuff that is personal and using it in a song, and writing about that and singing about that makes it easier to relate for other people. When you can feel that it’s something sincere and genuine.”

When you hear lyrics that carry as much honesty and sincerity as those of Nature Of’s, combined with the fact that they paint such a clear story, it makes one wonder if certain people listening recognize a specific moment in time from a song. “Maybe, I don’t know. I think there is a certain…uh, cryptic nature to a lot of the lyrics that maybe protect against any sort of direct confrontation. I like to use a little bit of smoke and mirrors, for the lyrics anyway. The music is always a good way to divert any sort of, like, if it is a sort of sadder song, or maybe has a lot of pain in the lyrics, you use the music as a kind of juxtaposition.” Steve muses as he sips at his coffee. 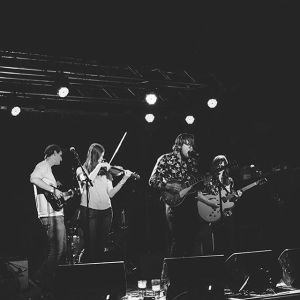 Nature Of was the first band to play the new Needle Vinyl Tavern in Edmonton earlier this month, at their “secret show” event the night before the official opening day. “We were lucky to receive that invitation, and that venue was amazing!” Kyla beams. The new venue has taken residence in the old CKUA Radio station building, one of which she has a fond memory of, “I had an aunt growing up who worked there, and I didn’t live in Edmonton but I remember when I was a kid she would make copies of tapes of like cool bands and I got a Tom Petty and the Heartbreakers cassette tape, and a Cars cassette tape…and when I [finally] went in there I was like ‘man, this is such a cool place!’”

The band also recently played at the Amplify Youth Music Festival in St. Albert, which was a 17 and under show to empower youth. “In general, a 16 year old probably wouldn’t like our music, so going in it was kind of tough to relax a little bit, but it was cool.” Cole adds, discussing how their music might not hold the same appeal to a younger crowd as the likes of Royal Foundry and Zerbin, who also played at the event. Their songs are sprinkled with metaphors, apparent in the song The Night, where Steve croons the words “It’s like a mountain in the ocean.” over and over again. The veiled lyricism is powerful, and not something that younger generations might leap to over songs like Timber, which don’t hold any secrets (not to say that we don’t need a little gutless pop song in our lives every once in a while).

“We love what we do, and it’s something we are able to do well while working full time.” Steve notes, as Nature Of is getting ready to release their second album in the fall. “It’s feeling a little different at this point…there is more violin and more high energy songs, which are exciting to play live. I think it feels at this point a little bit more of a departure of the folkier side of things.” Though the band doesn’t have any more scheduled shows outside of their last performance this past Friday in Calgary, keeping an eye out for those is definitely the best way to get a sneak peak of their new music. “What we steadily look forward to is playing live and performing them. The writing process is a lot of fun and recording too, but there is a lot more scrutiny in it and fine tuning, whereas a live show is a pretty honest reflection of how the song sounds.” Steve adds. When asked about playing new songs, Cole was quick to jump in, “Usually when we have a new song to play, we do one at a time [at shows], but this time we played four new songs and four old songs at the Needle, so that was huge for us.”

“It was like our first show again” notes Steve, as the band nods their heads and agrees. “It was kind of a blur, there are a few things that we can now look back and know we need to work out a few things.” Cole adds as we wrapped up the interview.

I sat here for a while and tried to think of the best way to end this article. The people in this band are some of the most humble, sweet, heart-on-their-sleeve people I have ever met, and you need to find the right words to do it justice. So what I ended up with, though short, was this: whatever you’re feeling, whatever point in your life you’re at, the music of Nature Of is a comforting reminder that you’re not alone – and that’s pretty spectacular.

“If there are [people reading this], thanks for listening. It is a strange thought still to think that there are people listening to our work, so ya thank you everyone! Oh, and the service [at Friends and Neighbours] is excellent.” 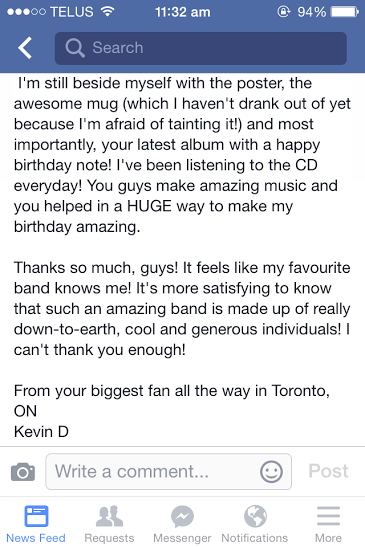 Check out their first album, self titled Nature Of, on their website, here.