Welcome back to Local Spotlight, where we profile great local talent from across Alberta. If you’re reading this, it means one of two things: 1) you tolerate my writing, and/or 2) you appreciate good music by good people. This week I spoke with Edmonton’s own DJ Bradley James about the art of DJing and what happiness sounds like.

This is Local Spotlight.

So, before I get into this, I need you, the reader, to get an image in your mind; get comfy, clear your thoughts – ok, ready?

It’s Friday, and you have the day off work. In fact, all of your friends have the day off work too. You find yourself standing on a beach, it’s 28 degrees, and you just cracked open a cold one. Someone is setting up a game of beersbie, and there isn’t a cloud in the sky – and it’s going to stay that way all day.

I hope what you got out of picturing that was a feeling of pure, unadulterated happiness, which also happens to be the feeling you get when you turn on a mix by DJ Bradley James – a sound made up of a thousand smiles. Sure, that might sound extremely corny, but if you don’t want to listen to something that sounds like a thousand smiles then I’m not sure you’re really going to enjoy the rest of this article. In fact, I’m not even sure I want you to read the rest of this article. But this isn’t about you; it’s about Brad Dawson.

Seven years ago, Dawson began his journey into a world that would soon become much 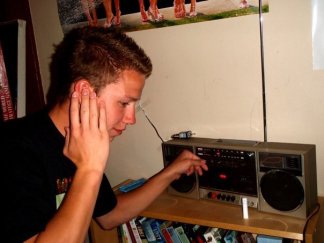 more than a hobby. “I started in second year University, which would have been 2009,” Dawson says, “I started fooling around with software and mixing beats and watching YouTube videos and whatnot, and started to pick it up and make mixes internally on my laptop and posting them to see what people thought.” With a few positive responses, and many more coming in, it was clear to Dawson that he was on to something, with his background in piano giving him a steady foothold to start. “Every song has a time signature…so if you can count beats then you can beat match, which is essentially the core of DJing. […] It’s also the musicality of it all, I can hear different keys and mix things together that sound good, which makes for smoother transitions.” Dawson says. His parents helped to foster his love for music, with the chime of notes from either the radio or a record constantly filling his childhood home. “My dad is a huge female pop ballad fan, like he loves Shania, Celine Dion, Sheryl Crow…my first concert was Shania Twain” he laughs. Dawson’s move to electronic music was new to his parent’s genre repertoire, with it being something they didn’t quite understand. But supportive parents are supportive parents, and the new sound didn’t deter them from showing up to his shows and watching the early hours of his sets.

Later that year, Dawson found himself entered in an amateur DJ showcase at a local club, embodying the epitome of “fake it ’till you make it”. “Going from my student house in my room, to literally being on this stage with my name on this LED screen behind me and [performing with] guys who know how to DJ and know how to use the equipment [was crazy]. I jerry-rigged the system [so] I was internally DJing on my laptop and kinda using the faders on the mixer.” he says, “But because I had practiced a lot and made the mix really seamless and musical, people didn’t really care that I didn’t have the technical skill. They just loved what was coming out of the speakers.” Mixing everything on the spot instead of performing a pre-recorded set, Dawson found himself leaving the showcase in a better state than before, catching the ear of local bar managers and landing a few subbing positions on the weekends. “I literally had two headphone jacks and one was on each side, and I plugged it into the mixer and was fading in and out.” he says, “and the guy who was the manager [of the bar Red Square] was a DJ himself and caught on to what I was doing, saying ‘Well, it’s fine, but why don’t I teach you how to actually DJ.'”. With a new mentor at hand and a few job prospects lined up, Dawson officially got his start in the hip hop atmosphere of the bar, learning the technical basics of the trade and how to DJ on vinyl. 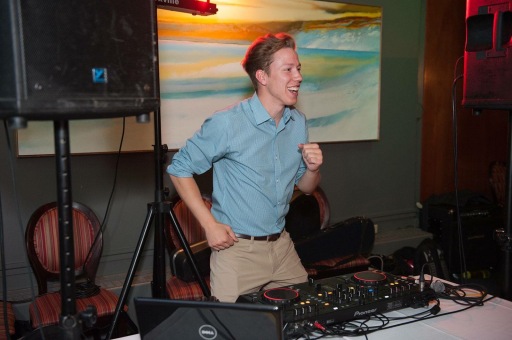 “When I do [mixes] for myself, I like the ‘feel good, funky tropical, suns shining’ [sound]” Dawson says about his musical taste now a days, with his dream venue being a chilled out beach party. “I strive for fun, and making people smile and making people happy.” he says, “Other DJ’s think I’m crazy. When I tell them this they’re like ‘I can’t believe you don’t want to be in this club full of thousands of people and making everyone bounce at the same time.’ And that would be awesome, and talking about it gives me chills, but it’s not my identity as a DJ.”

In terms of his actual shows, Dawson always mixes his music on the spot instead of creating pre-recorded tracks for his sets. “[Mixing every track] should be the norm, but then there are guys who go above and beyond that; they’re producing music live. They have stems, they have different samples, they are laying them over each other. That’s where I want to be.” he says, “I’m doing more of the minimum. I feel like the line should be mixing songs, [where I’m at], and reading the crowd instead of going down the list and playing the same tracks every night.” Understanding the crowd is a specialty of Dawson’s, picking up on small gestures or glances that show that interest is dwindling, even if the person giving off the hints doesn’t even know it yet. “If I look up and people are looking over at me, it’s like ‘ok they’re waiting for something’. You always want to see that constant motion on the dance floor,” he says. Not only does DJing take a certain degree of mind reading, it also lends itself as a subliminal message to people at the bar. “You can’t have the dance floor packed all night, because then the bar doesn’t make money”, he explains, “You’ll notice that good DJs will play a set of really dance-y fun songs, then something comes on that makes you say ‘oh, that’s ok, but let’s go grab a drink’. And that’s what the bar wants, the push and pull. You’re being played.” A good DJ should be able to keep people moving, convince the “more sober” people to buy more drinks, and keep the “less sober” people on the dance floor away from the bar – an art form of the most unconventional variety. So naturally this leads to the next question; what kind of songs are chosen to bring down the energy in the room enough to make the bar money? “If I put on a newer track that half the people know, like No More Parties in LA, some people might not know that yet. It’s getting popular, [maybe] it’s starting to play on the radio, and among the music crowd we know that song. But for some people it’s like ‘Oh, what is this, it’s slower than what we’ve been dancing too…let’s go get a drink.’ And then other people will be like ‘Oh, Kanye, I love this track it’s new, let’s stay and dance to it.'” Dawson says.

Being a DJ in Edmonton is not all sunshine and rainbows though. The opportunities to learn and develop are not as abundant as Dawson would like, and being able to hone your craft comes down to knowing the right people and being in the right place at the right time. “There’s a big disparity between guys who are trying it out and starting out, and guys who are club ready,” he says, “I’ve personally overseen the coaching and development of multiple DJs at different bars who will sub in for me, and the teaching is tough.” Finding himself thinking back on when he used to be the kid on the dance floor dreaming of one day being on the other side of that DJ booth, Dawson appreciates the necessity to mentor DJs that were once where he used to be. “A lot of different guys took me under their wing and helped me get to where I am today […], and I want to help [new DJs] get to the next level and keep that rich community in Edmonton alive.” he says, hoping that one day there will be more collaboration and less competition, especially since the opportunities to land a gig in the city are more vast than one would think. 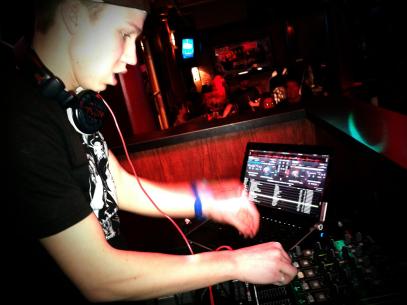 Starting to really find his place in the DJ world, DJ Bradley James is in the works of a re-brand. “A lot of the trends are to just go with a name and drop the “DJ” before – now you have guys like Kygo, and Sam Feldt and Thomas Jack and Porter Robinson. So I think I’ll drop the “DJ” [eventually]. I’m actually in the process of creating a logo right now, just because I’m getting to the point where I’m doing these events, these things for other people…and it’s just going to be Bradley James.” he says. The artist likes the personal connection with his name to the music, and doesn’t feel ready to take on a moniker that keeps his true identity hidden. “Having it as my name keeps me grounded. Obviously if you’re a bigger act or playing bigger shows, you might want to keep that act separate. But to me I like keeping it local, and there is a little bit of an authenticity of keeping your name a little bit similar to who you are. Plus, I’m not at the stage where that’s necessary and I need to hide behind a name.” he says.

Sharing music and bringing the feel good vibes are the end goals of DJ Bradley James’ career as a DJ, something that is overwhelmingly evident when talking to him about his music – just hearing him discuss the way his music makes not only listeners but himself feel brings a huge smile to his face. The music scene relies on artists like Dawson whose soul purpose in the game is to bring happiness to the people; make them feel so full of positive energy that they can’t help but move to the beat. To see for yourself, you can check out DJ Bradley James at Bounce Fest this Canada Day weekend in Edmonton, where he will be performing with a few other DJs and bands. You can also check him out at various locations in Edmonton, like Squires Pub on Saturday nights, The November Project sessions, and select Lululemon events, to name a few. Or, if I haven’t given you enough options as it is already, you can hire him on for weddings; so leave those homemade mixtapes in your car.

“Keep smiling, choose to be happy, and just enjoy life.”