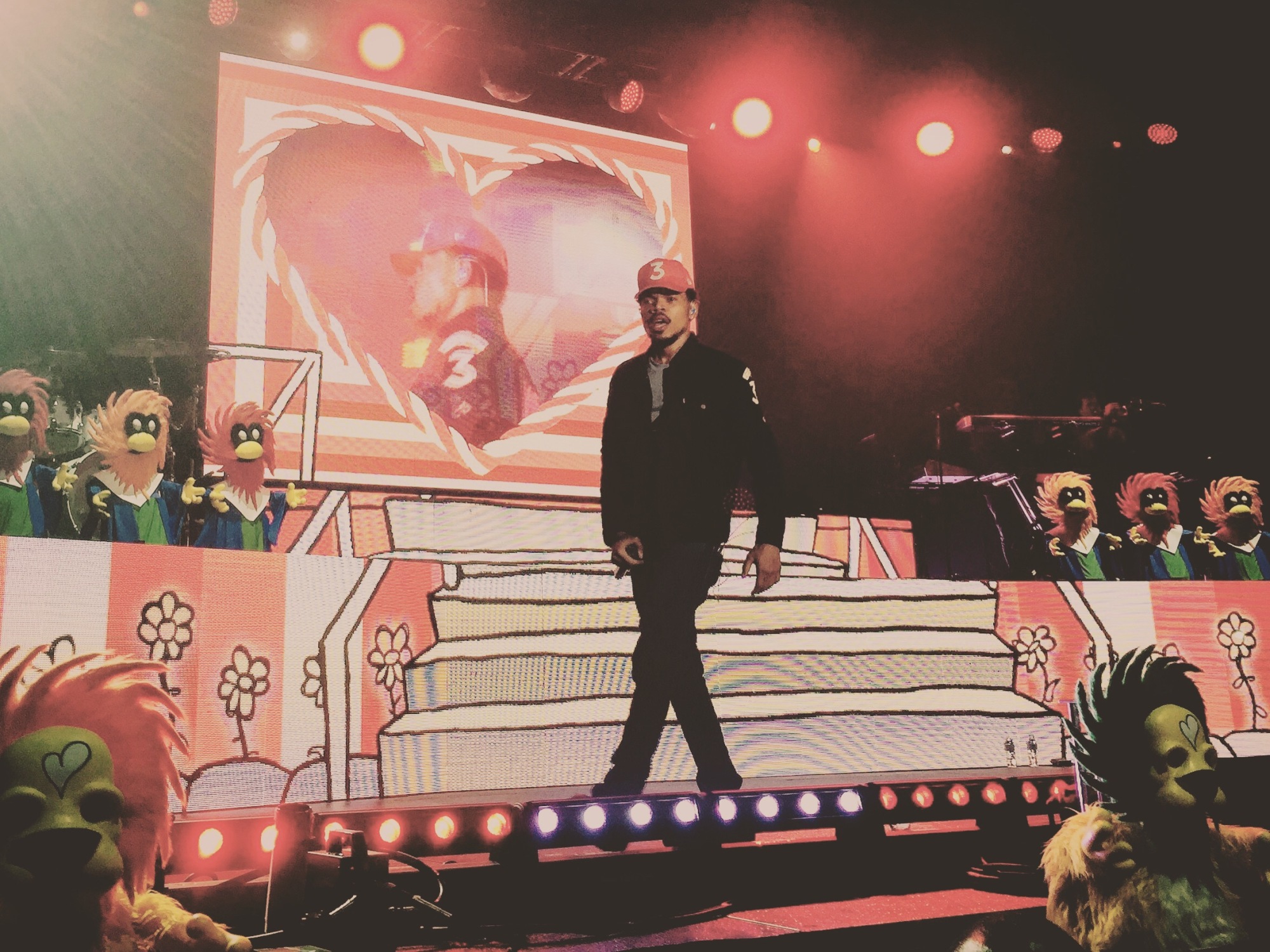 *click-bait disclaimer* I didn’t technically sneak into the concert, but I also didn’t pay for anything. Meh. Buckle up.

Every adequate human-being (people who don’t like music are certainly not adequate in my eyes) have that one, or maybe a small handful of artists or influencers that they would do just about anything to get into the same room with. In case you didn’t guess, mine is of course 21 Savage (21 21 21 21) – I even aged myself 21 years just to fit in even more with my idol. But, since 21 ain’t coming to my part of Canada anytime soon (22 Savage, pls?) my back-up idol is Chance the Rapper.

To set the standard for this story pretty high, It begins with me outright stanning Chance since the first time I ever listened to Acid Rap back in 2013. Four live performances and probably 3000 Twitter @’s later, I’m sitting on a 15-hour bus back home to make it to class in the morning.

Alright. More background. Why didn’t I have tickets already for my self-proclaimed favourite artist in the world? HAAAAA, well because my life seems (/seemed) to be a largely unfortunate series of events wherein I originally purchased tickets to BOTH nights of Chance’s two night Vancouver excursion to perform his latest mixtape, Coloring Book.

But since it is my final semester of university, my professors have decided to collude together against my happiness for the last few times that they legally can. Which means, BOOM – Midterm, from 6-9PM on night one.

“That’s fine, let me just sell night one, heh heh there is alwaaays night two.” BAM – randomly assigned presentation that could be assigned to any Thursday on the entire semester the morning after night two.

(For those out there thinking, “hey, but Hosp, that still means there was time? You could’ve made it!”, let’s do a little math. It’s roughly a 14-hour bus to Vancouver (one-way) which means about 28 hours total, plus show time equals about 30 hours. If somehow Chano decided to move his concert to around exactly 15 hours after my midterm – about noon the next day – then yes, I probably could’ve made it perfect, and even had time for Denny’s breakfast when I got home. “But Hosp, why not fly?!” Well, a quick venn-diagram of Air Canada’s prices of a return flight between Calgary to Vancouver within the same 30 hour or so window cross-referenced with my full-time university student budget will reveal that I was roughly 1 BILLION F*CKING DOLLARS SHORT. So no, even for a fully-fledged stan, it was not quite possible.)

So there I was, just a worthless bag of bones (giggity) following my Chano family on Twitter experiencing the Magnificent Coloring World Tour each week from different cities across North America, taking in each and every live-stream possible from my couch, pretending my sorry non-ticket-having-ass was there, and pretending I was okay with it.

To make myself feel better, I told myself “Australia! He hasn’t announced those dates yet!” As I was set to leave for Australia on the last day of January; The dates dropped – three weeks before I would land, Chance would have just come and gone.

Heart. Break. City. (Population: ME AND MY FOUR OR FIVE TEARS)

But then! A glimpse of hope! A blessing!

My aforementioned midterm? Well now it was pushed back exactly one week meaning it was no longer an issue, but with no tickets anymore and a sold-out show, the odds weren’t exactly great. So feeling deflated I still decided to sit this one out.

Then, exactly 32 hours before the first scheduled concert while walking to a group meeting at noon, I get a strange Twitter alert from Chance replying to a tweet.

As  I click to see more, I see that Chance and the whole Social Experiment gang are accepting another fans invite to come play dodgeball the following day at noon (in exactly 24 hours) before the show. An important note is that at this point in the timeline, after three shows, I had still NEVER met Chance the Rapper even though I had met his entire band a year or two ago.

Now, some more math: An exact location where Chance would be, plus 2 and a half days until my presentation and no midterm = HOSP IS GOING TO VANCOUVER BECAUSE WHY THE HELL NOT.

After pleading with a few different pals to carpool with me (in their car, in one of the busiest weeks of the year, lmao) led to no avail, selling an ASSC hat online for 95$ USD, and narrowly getting a bus ticket from the phone operator in time, my room-mate BLESSED my black ass with a ride to the bus depot just in time for my 6:45PM  departure (Logan, you da realest).

On the bus now, no concert ticket in hand, all I had to do make it Vancouver to meet Chance and pray for a concert ticket–the bus ride was officially the easy part.

Did I really think it would be that easy? I should’ve known. Just like the song goes “when the praises go up… the mountain comes down. On top of a f*cking semi.” Yup, nothing like a casual rockslide on the highway between provinces. I knew I should’ve paid the extra five dollars for the bus that drives over rockslides.

Sitting there completely ready to turn around knowing that at the very least I tried my best, another blessing. There was an alternate route – an extra 2 hours, plus backtracking time – but a way nonetheless.

Fast-forward past 16 hours of the worst discomfort that you can imagine, I was finally there. Ready to trek to the dodgeball game, I linked up with the squadron for a quick pre-meal before we scoured the town looking for Chance.

Following the theme of the story – blessing. With dodgeball now very unconfirmed, another Twitter alert! “Vancouver, who has SANDWICHES for the squad!” Chance’s assistant tweeted (y’know, having just crossed the border and playing a show the previous night, I’m sure a little bit of BC’s world famous SANDWICHES would definitely hit the spot.)

Welp, it’s Vancouver, can’t be too hard to track down some SANDWICHES if that’s what it will take to meet my favourite rapper – I answered the Tweet with gumption, proclaiming I had them covered to which the only reply I needed to see was listed forever me: “Whats ur full name.”

Fast forward again another a few hours: long story short the SANDWICHES were not needed after all, after I’m assuming they figured out what city they were in and what that strange smell was. Once again linking up with some old friends and then the squad on UBC’s campus for the show, now with free tickets waiting for me, I was one step closer. Time for the real finesse to begin.I arrive at will-call to snag my free ticket (Colleen, you as well are da

I arrive at will-call to snag my free ticket (Colleen, you as well are da realest – thank you so much), and to my slight dismay (as much dismay as you can be with a free ticket) the ticket wasn’t for general admission, it was for a seat in the first bowl. Amazing of course, but I’m not one to settle – I had 1st row in my sights and I was going to make it there one way or another.

Now, let’s break down the finesse into a few simple steps for the fans at home:

Step 1: Act. Come back in 20 minutes and complain about being given the wrong ticket. At a university venue, more often than not, nobody will know what’s going on. “Oh, Chance’s assistant left me a ticket – it was supposed to be for GA but I think you might’ve given me the wrong ticket” – yeah, like that is going to work. HAHAHAAH IT WORKED WTF IT ACTUALLY WORKED. “So sorry about that! We’ll go grab you your wristband right away sir!”

Step 2: Confidence. I Waltz into GA and stake out the weakest point in the crowd to make my way as close to the front as possible. Since there was only 1 GA entrance, I chose the farthest point from that, getting fairly close, yet verrrrry left from the front of the stage.

Step 3: Showtime. The lights go down, the mosh goes up. In true mosh fashion, one side pushes one way, the other side pushes the other, and Hosp slides closer than NBA players into college girls DM’s. Inch by inch I make my way to the 2nd or 3rd row. I’m pretty damn stoked.

Step 4: Luck. “Braincells,” Chance’s ode to SANDWICHES starts playing, and the footlong’s are being passed around under the canopy of Chance 3 hats as to not get seen by hungry security guards. My apparently-guilty looking ass not even paying attention to any of the SANDWICHES around me, all of a sudden gets ripped forward by Moses dressed as a security guard. Splitting the red sea of tour t-shirts, I’m pulled forward by the arm to be accused on sand-witchery. Upon showing my empty hands, not only am I let go with a slight nod, I am now ON THE GOD DAMN FENCE. Call me front-row shawty. Blessed.

I swear to god this is a no zoom, no crop photo. I was actually this close. IG: @hxspey

Let me just remind you all that less than 24 hours before this moment I was on a last minute charter bus ride to Vancouver, trapped behind a rock-slide, with no ticket for the sold-out concert, and definitely no money for a resale priced ticket. Now, I was front row singing every single word, getting pointed at by my idol for rocking a retro Cubs jersey (of his hometown Chicago) during World Series week.

How? By taking a few risks, making a few connections, and most importantly by CHASING AFTER MY DREAMS AND TURNING THEM INTO REALITY. No, it is not always possible, and even when it is, it doesn’t always work out this great – but once in a while you’ve just gotta do something that may seem a little ill-advised and shoot your shot. You never know where your next blessing will come from.

Finally, the show ends and every second of it was more magical than you could possibly imagine.

Peter Cottontale, SoX member and Chance’s keyboardist, does one final lap across the stage as I shout out his name and wave him over – with a squint he walks closer and I motion with the same retro Chicago Cubs Sammy Sosa jersey that I had previously worn to each of the 4 performances. As he approaches my zone of the stage, I toss the jersey to him, which he takes back with him. Unreal. 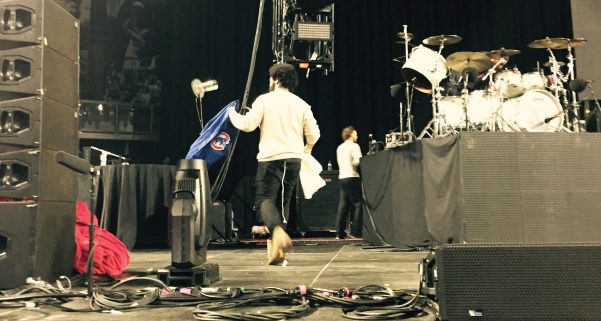 Waiting at the trailers with some good company for the band to come out after the show, I run into Peter and Francis (& the Lights), and I tell Peter that I was the one who threw the jersey, and that I hope he rocks it soon to which he replies “nah man, I’m giving it to Chance so he can wear it instead.” ONE LAST BLESSING.

Even though I still didn’t get the opportunity to meet Chance the Rapper this fourth time around, I have never been closer and couldn’t feel a bigger sense of accomplishment with the last two days of my life. I lived out a few dreams this time around, and on the bright side still have a few more dreams to live out for the next tour.

Until then… when the praises go up, the blessings come down.

–Hospey. (Chano, feel free to follow me once you read this so I know)