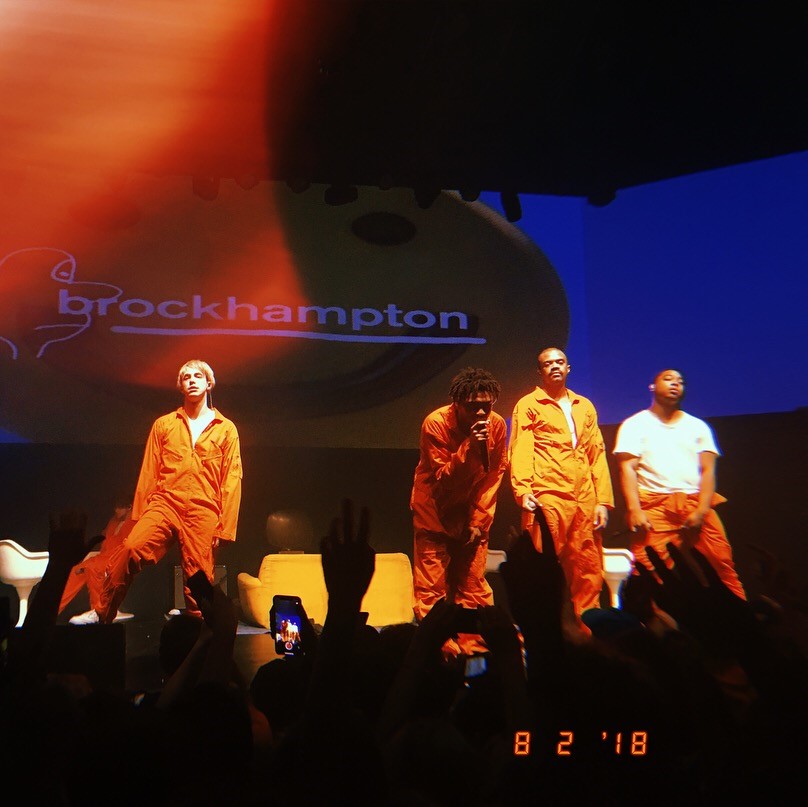 When its all said and done and the youngest set of hip-hop millennials will look back to 2017/2018 and remember Brockhampton as the most exciting movement of the time. Cam, a high school hip-hop head based somewhere in Canada, tells the story of his first time seeing Brockhampton perform in a way only he could tell.

Check out the RLGT concert review of Brockhampton’s 2018 Toronto show.

The Night Brockhampton Took Over The City of Toronto 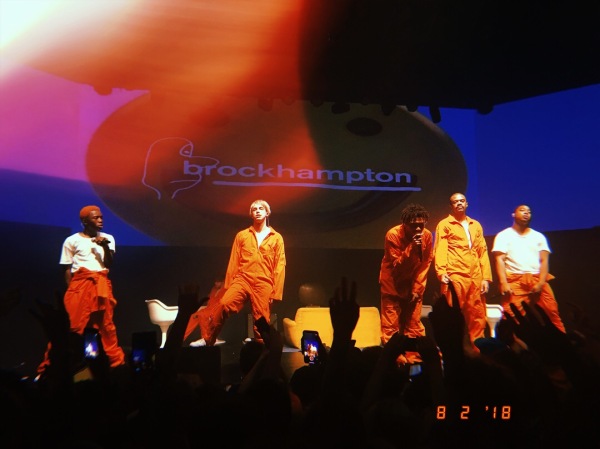 I had been looking for tickets for months on end.

I searched Twitter, flipped through Reddit threads and browsed Kijiji to no prevail. Tickets were originally sold for $40, but I was late on the Brockhampton hype train and unfortunately missed that stop. The only offers I was getting were for around $140 a ticket and I mean I like Brockhampton, but I don’t know if I like any artist for that much money. Luckily exactly three days before the concert, I tested my luck on a Twitter offer. A few messages exchanged and the kid had two tickets to Brockhampton (shoutout to Shawn and his friends). Let’s go.

Although we arrived two hours before doors opened, and three and a half before Brockhampton took the stage, the tent outside was completely filled with fans collectively freezing. The line was already ecstatic. Chants included several repetitions of “Brockhampton”, “Fuck you Kevin”, “Fix your teeth” and “Merlyn”. It was easily the most diverse crowd I’ve experienced. There were people of different races and orientations who had come together to enjoy the show… with a few painted blue and draped in orange jumpsuits, which was dope.

Ashlan Grey and Brian Kinnes, the boyband’s videographers for the tour walked around with cameras, interviewing people in line for the group’s vlog series. Once we were ushered in, I rushed right up to the stage. The merchandise line was ridiculously long, to the point where to buy a hoodie you would need to sacrifice your spot at the concert. Although Brockhampton’s merchandise is dope, nothing was going to separate me from holding on to my prime positioning. I valued the experience more anyways.

The preshow was okay, a mix ranging from classic rock to OutKast kept us all entertained. Anticipation swelled and the crowd jostled to hold it’s position. The stage setup was extremely simple. There were traffic lights at each end, with seats scattered around and the signature Brockhampton couch right in the middle. When the lights dimmed, the entire crowd rushed the stage, pushing against the barrier at the front. A man appeared onstage, wearing a headlight and a white facemask. He walked up to the front of the stage, changed into an orange jumpsuit and uncovered his devilish grin. To the crowd’s delight, it was the same face featured on the cover of all three wildly-successful Saturation albums, Ameer Vann. He started jumping as BOOGIE screamed through the speakers and the energy immediately shot up to 11. 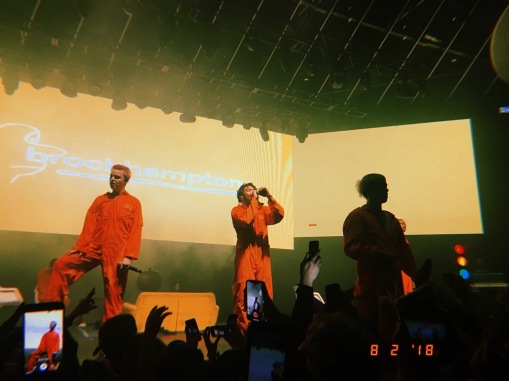 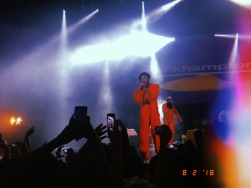 The moshpit? Insane. People were going fucking crazy to every song. It was the closest I’ve personally ever been to tapping out and getting air away from the crowd. Completely exhausted by the end of it, but wouldn’t have had it any other way. From the first song to the very last, the crowd kept up. Although it got overwhelming at times, it made for an enjoyable experience.

To summarize, the concert was incredible and the atmosphere was electric. Everyone in the crowd rapped every verse, sang every chorus and kept the energy alive to the end. Brockhampton’s setlist was structured, featuring a steady placement of high-energy songs like SWAMP, GUMMY and BUMP while mixing in more relaxed tracks like FACE and BLEACH (allowing us to momentarily catch our breath). If anything, the setlist was a reminder of how strong their young discography is as every song banged. Bearface closed out the set and sang the outro tracks of the last two Saturation albums, SUMMER and TEAM. It symbolized the end of the show (or simply the end of a moment), just as both songs symbolized the end of their respective albums. Bearface walked off and the venue went dark. Minutes later the memorable chorus of MILK rang through the arena, crooned by Kevin backstage. The group quickly re-emerged playing HOTTIE, HEAT and then FIVE RENDITIONS of STAR before the show was over, for real this time. At one point, everyone who was either painted blue or dressed in a jumpsuit was invited to come up on stage with the guys and perform, a pretty cool way to pay respect to the fans who went all-in. 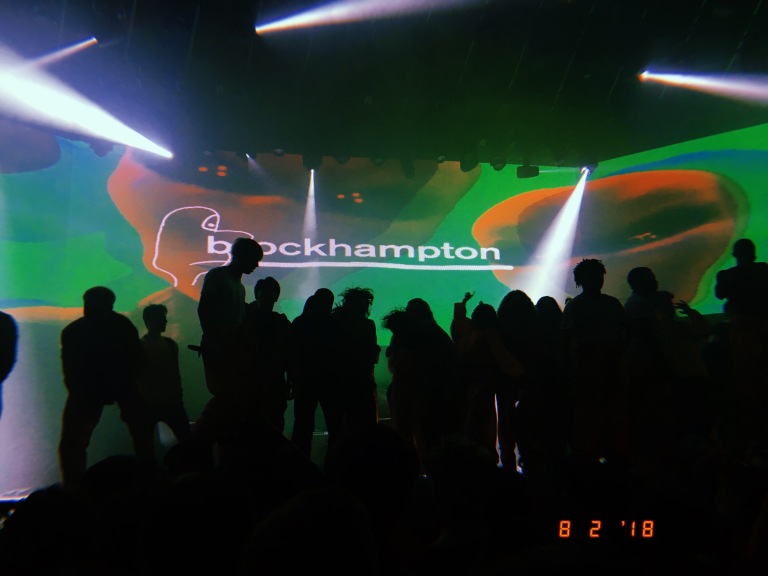 Brockhampton’s chemistry is realized most when on stage together. Members of the band hyped each other up, ad-libbed verses, ran around on stage and danced together. Everyone donned bright orange jumpsuits, the same look as in past music videos. Truthfully, nothing felt forced or out-of-place. Everything was just right. Each artist killed their verse and captivated the crowd making it nearly impossible to choose a fan-favorite. They carried on an energy like you couldn’t believe (side note: how do they do this every night?). The band would frequently interact with the crowd, talking to the Toronto-based fanbase, joking around and even asking us to boo them. A few songs would round off with all the audio being cut, having to rely on the audience to sing the chorus “just one more time” which made for a few of my favourite moments. Brockhampton most of all seemed to simply enjoy the moment. Throughout the concert, an artist would look over the crowd and a grin would slowly start to form. The crowd echoing their names, thriving off the infectious on-stage energy. This was a group whose studio debut released in early June. Most of them never imagined this happening, at least not this fast. Only nine months later and they had grown to become arguably the most exciting thing rap music has seen in years.

I guess as this is a concert review, by proxy I’m obligated to list some downsides. Well, my white Converse are destroyed, Shawn Mendes never came and Brandon & I missed the bus home. (Definitely could have been worse).

Be sure to catch Brockhampton on their Love Your Parents Tour or summer music festival run in 2018!

18. american/canadian. catch me on twitter @cam_hache View all posts by camhache